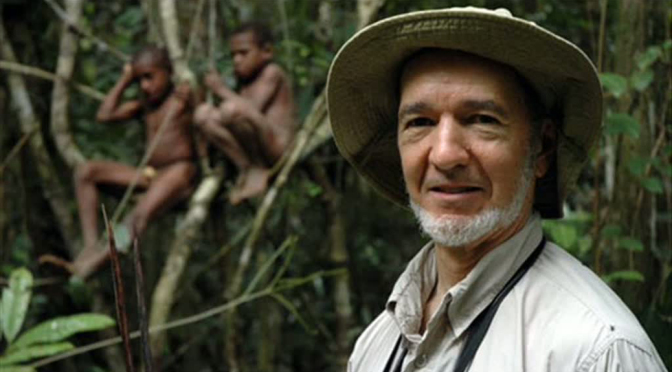 At some point I told myself that, if I did survive, I should stop obsessing about things in life less important than survival.

…in the second incident, my New Guinea friend Malik and I were on an island off Indonesian New Guinea and wanted to get ourselves and our gear to the New Guinea mainland, separated from the island by a strait a dozen miles wide. Around 4:00 P.M. on a clear afternoon, slightly more than two hours before sunset, we joined four other passengers in a wooden canoe about 30 feet long, driven by two outboard motors mounted on the stern and with a crew of three young men. The four other passengers were not New Guineans: instead, they were a Chinese fisherman working on the New Guinea mainland, plus three men from the Indonesian islands of Ambon, Ceram, and Java respectively. The canoe’s cargo and passenger space was covered by a plastic awning about four feet high, stretched over a framework, loosely attached to each side of the canoe, and extending from about 4 feet in front of the stern forward to 10 feet behind the canoe’s prow. The three crew sat in the stern at the motors, and Malik and I sat just in front of them, facing the rear. With the awning over us and at our sides, there was little outside that we could see. The four other passengers sat at our backs, towards the canoe’s prow.

The canoe set off, and the crew soon had the engines up to full speed, through waves several feet high. A little water splashed into the canoe under the awning, then a little more, and the other passengers began groaning good-naturedly. As some more large quantities of water splashed in, one of the crew began bailing water immediately in front of me out the loose sides of the awning. More large quantities of water came in, soaking the luggage stored towards the front of the canoe. I put my binoculars for protection inside the small yellow knapsack that I was holding in my lap, and that contained my passport, money, and all of my field notes wrapped inside a plastic bag. Over the roar of the engines and the crashing of the waves, Malik and the other passengers began to shout loudly, now no longer good-naturedly, at the driver, telling him to slow down or turn back. (This and all the rest of the conversations during this whole incident were in the Indonesian language, the official language and the lingua franca of Indonesian New Guinea.) But he didn’t slow down, and more water splashed in. The accumulated weight of water was now causing the canoe to ride so low that water began pouring in over the sides.

The next few seconds, as the canoe settled lower into the ocean, were a blur that I can’t reconstruct in detail. I was now scared that I would be trapped under the canoe’s plastic awning as it sank. Somehow, I and everyone else managed to get out of the canoe into the ocean; I don’t know whether some of us towards the rear jumped out of the open rear space not covered by the awning, or whether we instead crawled out under the awning’s sides, and whether the passengers in front of us crawled out under the awning or scrambled to the open space in front or to the rear of the awning. Malik told me afterwards that the crew got out of the canoe first, then I got out, then Malik.
The next minute was even more of a panicked blur for me. I was wearing heavy hiking boots, a long-sleeved shirt, and shorts, and found myself in the water several yards from the canoe, which had capsized and was now bottom up. The weight of my hiking boots was dragging me underwater. My initial thought was a vivid, frightened “what is there that I can hold on to to keep myself afloat?” Near me, someone was clinging to a yellow life preserver, which I tried to grab in my panic, but the other person pushed me away. From my position now floating in the water, the waves seemed high. I had swallowed some water. While I can swim for short distances in a calm swimming pool, I wouldn’t have been able to swim or float for many minutes through waves. I felt overwhelmed by fear that there was nothing to keep me afloat…