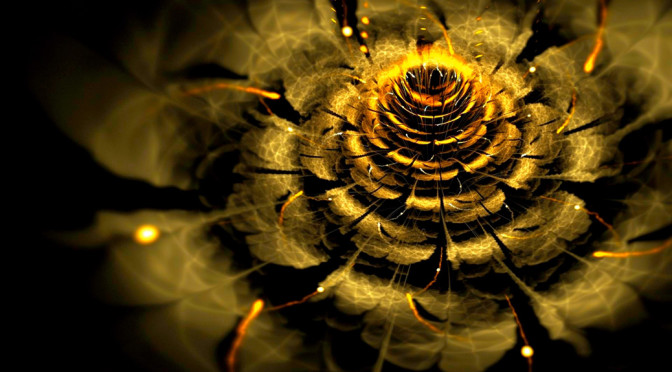 The Golden Flower is the Elixir of Life (Chin-tan; literally, golden ball, golden pill). All changes of spiritual consciousness depend upon the heart. There is a secret charm which, although it works very accurately, is yet so fluid that it needs extreme intelligence and clarity, and the most complete absorption and tranquillity. People without this highest degree of intelligence and understanding do not find the way to apply the charm; people without this utmost capacity for absorption and tranquillity cannot keep fast hold of it.
The Secret of the Golden Flower

The Tai I Chin Hua Tsung Chih 1)↓ can be traced back to the seventeenth century as having been printed from wooden tablets. The editor describes having found an incomplete copy dating from that time in the Liu-li-ch’ang, the old street of dealers in books and antiquities in Peking, and tells how he filled it out later from a friend’s book. But the oral tradition goes back even further than that, to the Religion of the Golden Elixir of Life (Chin-tan-chiao), which developed in the T’ang period in the eighth century. The founder is said to have been the well-known Taoist adept, Lü Yen 2)↓ (Lü Tung-pin), counted later by folklore as one of the eight immortals, about whom in the course of time a rich store of myths has gathered…

This sect 3)↓, like all religions, native and foreign, met with tolerance and favour in the T’ang period and spread widely, but, as it was always an esoteric and secret religion, in the course of time it began to suffer persecution because of members being suspected of political intrigues. Again and again its adherents were persecuted by a hostile government, lastly, in an extremely cruel way by the Manchus, just before their own fall 4)↓. Many members have turned to the Christian religion, and all, even if they have not actually entered the church, are very friendly towards it.
Our book gives the best available account of the religion of the Golden Elixir of Life. The sayings are attributed to Lü Yen, whose other name was Lü Tung-pin, or Lü, the Guest of the Cavern. In the book he is introduced as the patriarch Lü, Lü-tsu. He lived at the end of the eighth and at the beginning of the ninth century. A later commentary on his sayings has been added, but it springs from the same tradition.
Whence did Lü get his esoteric, secret lore? He himself attributes its origin to Kuan Yin-hsi, the Master Yin-hsi of the Pass (Kuan, i.e. Han-ku Pass), for whom, according to tradition, Lao-tse wrote down his Tao Te Ching…

If we ask whence this light-religion comes, we can first of all consider Persia, as in the T’ang period there were Persian temples in many places in China. But even though certain points correspond with the religion of Zarathustra, and especially with Persian mysticism, there are, on the other hand, very strong divergences. Another view to be considered is that of a direct Christian influence. In the T’ang period the religion of a Turkic tribe, the Uigurs, who were allied with the Emperor, was the Nestorian branch of Christianity; it stood in high favour, as is witnessed by the well-known Nestorian monument in Sianfu erected in 781, and bearing both a Chinese and a Syriac inscription. Thus connections between the Nestorians and the Chin-tan-chiao are quite possible.
Richard Wilhelm, The Secret of the Golden Flower