Time is a child — play­ing like a child — play­ing a board game — the king­dom of the child. This is Tele­spho­ros, who roams through the dark re­gions of this cos­mos and glows like a star out of the depths. He points the way to the gates of the sun and to the land of dreams.

In 1950 I made a kind of mon­u­ment out of stone to ex­press what the Tower means to me. The story of how this stone came to me is a cu­ri­ous one. I needed stones for build­ing the en­clos­ing wall for the so-called gar­den, and or­dered them from the quarry near Bollin­gen. I was stand­ing by when the ma­son gave all the mea­sure­ments to the owner of the quarry, who wrote them down in his note­book. When the stones ar­rived by ship and were un­loaded, it turned out that the cor­ner­stone had al­to­gether the wrong mea­sure­ments; in­stead of a tri­an­gu­lar stone, a square block had been sent: a per­fect cube of much larger di­men­sions than had been or­dered, about twenty inches thick. The ma­son was fu­ri­ous and told the barge men to take it right back with them.
But when I saw the stone, I said, “No, that is my stone. I must have it!” For I had seen at once that it suited me per­fectly and that I wanted to do some­thing with it. Only I did not yet know what.
END_OF_DOCUMENT_TOKEN_TO_BE_REPLACED

Man’s heart stands under the fire sign. 1)↓ The flames of the fire press upward. When both eyes are looking at things of the world it is with vision directed outward. Now if one closes the eyes and, reversing the glance, directs it inward and looks at the room of the ancestors, that is the backward-flowing method. The energy of the kidneys is under the water sign. When the desires are stirred, it runs downward, is directed outward, and creates children. If, in the moment of release, it is not allowed to flow outward, but is led back by the energy of thought so that it penetrates the crucible of the Creative, and refreshes heart and body and nourishes them, that also is the backward-flowing method. Therefore it is said, The Way of the Elixir of Life depends entirely on the backward-flowing method.
END_OF_DOCUMENT_TOKEN_TO_BE_REPLACED

‘Master Lü-tsu said: That which exists through itself is called the Way (Tao)’ – The Secret of the Golden Flower begins. The Hui Ming Ching begins with the words: ‘The subtlest secret of the Tao is human nature and life.’

It is characteristic of the Western mind that it has no concept for Tao. The Chinese character is made up of the character for ‘head’, and that for ‘going’. Wilhelm translates Tao by Sinn (Meaning). 1)↓ Others translate it as ‘way’, ‘providence’, or even as ‘God’, as the Jesuits do. This shows the difficulty. ‘Head’ can be taken as consciousness, 2)↓ and ‘to go’ as travelling a way, thus the idea would be: to go consciously, or the conscious way. This agrees with the fact that ‘the light of heaven’ which’dwells between the eyes’ as the ‘heart of heaven’ is used synonymously with Tao. Human nature and life are contained in ‘the light of heaven’ and, according to Liu Hua-yang, are the most important secrets of the Tao. Now ‘light’ is the symbolical equivalent of consciousness, and the nature of consciousness is expressed by analogies with light. The Hui Ming Ching is introduced with the verse:

If thou wouldst complete the diamond body with no outflowing,
Diligently heat the roots of consciousness 3)↓ and life.
Kindle light in the blessed country ever close at hand,
And there hidden, let thy true self always dwell.

These verses contain a sort of alchemistic instruction, a method or way of creating the ‘diamond body’ which is also meant in our text. ‘Heating’ is necessary; that is, there must be an intensification of consciousness in order that the dwelling place of the spirit may be ‘illumined’. But not only consciousness, life itself must be intensified. The union of these two produces ‘conscious life’. According to the Hui Ming Ching, the ancient sages knew how to bridge the gap between consciousness and life because they cultivated both. In this way the sheli, the immortal body, is ‘melted out’, and in this way ‘the great Tao is completed’.
If we take the Tao to be the method or conscious way by which to unite what is separated, we have probably come close to the psychological content of the concept. In any case, the separation of consciousness from life cannot very well be understood to mean anything but what I have described above as an aberration, or deracination, of consciousness. Without doubt, also, the realization of the opposite hidden in the unconscious, i.e. the ‘reversal’, signifies reunion with the unconscious laws of being, and the purpose of this reunion is the attainment of conscious life or, expressed in Chinese terms, the bringing about of the Tao.
C. G. Jung, Commentary to “The Secret of the Golden Flower”

This summary and the following diagram have been arranged by Cary F. Baynes 1)↓

The Tao, the undivided, great One, gives rise to two opposite reality principles, the dark and the light, yin and yang. These are at first thought of only as forces of nature apart from man. Later, the sexual polarities and others as well are derived from them. From yin comes K’un, the receptive feminine principle; from yang comes Ch’ien, the creative masculine principle; from yin comes ming, life; from yang, hsing or human nature.
Each individual contains a central monad, which, at the moment of conception, splits into life and human nature, ming and hsing. These two are supra-individual principles, and so can be related to eros and logos.
In the personal bodily existence of the individual they are represented by two other polarities, a p’o soul (or anima) and a hun soul (animus) 2)↓. All during the life of the individual these two are in conflict, each striving for mastery. At death they separate and go different ways. The anima sinks to earth as kuei, a ghost-being. The animus rises and becomes shen 3)↓ a spirit or god. Shen may in time return to the Tao.
If the life-energy flows downward, that is, without let or hindrance into the outer world, the anima is victorious over the animus; no spirit-body or Golden Flower is developed, and at death the ego is lost. If the life-energy is led through the ‘backward-flowing’ process, that is, conserved, and made to ‘rise’ instead of allowed to dissipate, the animus has been victorious, and the ego persists after death. It then becomes shen, a spirit or god. A man who holds to the way of conservation all through life may reach the stage of the Golden Flower, which then frees the ego from the conflict of the opposites, and it again becomes part of the Tao, the undivided, great One.

Diagram of the Chinese concepts concerned with the development of the Golden Flower, or immortal spirit-body 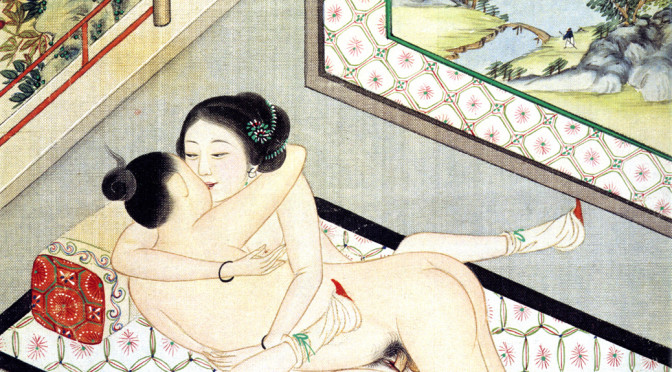 Every man who unites bodily with a woman feels pleasure first and then bitterness; when the seed has flowed out, the body is tired and the spirit weary.

It is quite different when the adept lets spirit and energy unite. That brings first purity and then freshness; when the seed is transformed, the body is healthy and free.
This is the sublimation of the seed into energy. If the pupil does not understand this principle, and lets the energy flow out directly, then the energy changes into seed; this is what is meant when it is said: ‘Emptiness finally flows into phenomena.’

There is a tradition that the old Master P’eng grew to be eight hundred years old because he made use of serving maids to nourish his life, but that is a misunderstanding. In reality, he used the method of sublimation of spirit and energy. In the Elixir of Life symbols are used for the most part, and in them the fire of the Clinging (Li) is frequently compared to a bride, and the water of the Abyss (Kan) to the boy (puer aeternus). From this arose the misunderstanding about Master P’eng having restored his virility through women. These are errors that have forced their way in later.
The Secret of the Golden Flower

…when the work is so far advanced that secret confirmations are experienced, it does not matter if, at the same time, one’s ordinary affairs are put in order, so that one can fulfil one’s karma. This means the living manner of the circulation of the light. Long ago, the True Man of the Purple Polar Light (Tzu-yang chen-jen) 1)↓ said a word: ‘If one cultivates one’s action while mingling with the world and is still in harmony with the light, then the round is round and the angular has angles; then he lives among men, mysterious yet visible, different and yet the same, and none can compass it; then no one notices our secret actions‘ The living manner of the circulation of the light has just this meaning: to live mingling with the world and yet in harmony with the light.
The Secret of the Golden Flower

Meditation, Stage 4: The centre in the midst of the conditions.

When one is so far advanced that every shadow and every echo has disappeared, so that one is entirely quiet and firm, this is refuge within the cave of energy, where all that is miraculous returns to its roots. One does not alter the place, but the place divides itself. This is incorporeal space where a thousand and ten thousand places are one place. One does not alter the time, but the time divides itself. This is immeasurable time when all the aeons are like a moment.
The Secret of the Golden Flower