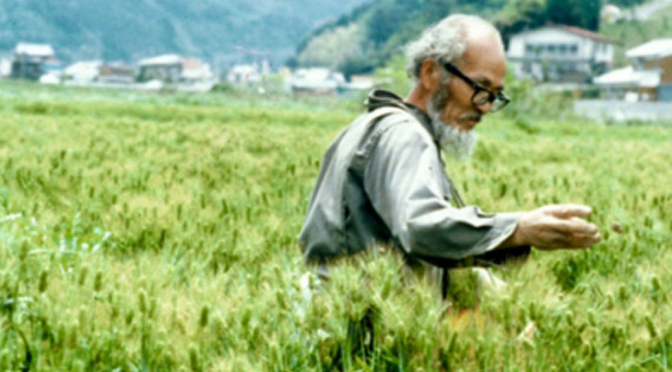 It was 1970, and the extent to which our species—supposedly the most intelligent—had failed as steward of the planet had only begun to sink in on me. At age twenty-six, in my first big „ah-ha” moment, I was struck by the realization that we humans had actively created the food scarcity we claimed to fear. We were (and still are) feeding more than a third of the world’s grain to livestock, which return to us only a fraction of those nutrients. I was seized with curiosity—why would any species disrupt the source of its own nourishment, its very survival? The next year I published Diet for a Small Planet. Could food, I wondered in that book and in subsequent writings, be humanity’s pathway to sanity?
Not many years later, Masanobu Fukuoka’s volume, now in your hands, swept across the West; it spoke directly to many who had come of age in the sixties and who were now eager to move beyond protest to practical solutions. I was one. True, we’d not yet heard of global climate change; but the dangers of chemical farming were becoming evident to many. We wanted to believe there was another way to nourish ourselves.

Readers who expect this to be a book only about farming will be surprised to find that it is also a book about diet, about health, about cultural values, about the limits of human knowledge. Others, led to it by hearsay of its philosophy, will be surprised to find it full of practical knowhow about growing rice and winter grain, citrus fruit, and garden vegetables on a Japanese farm. WENDELL BERRY

The One-Straw Revolution we received as an empowering testament to one person’s courage to reject the common wisdom that laboratory, narrowly profit-driven science was the salvation of farming. Instead, Fukuoka taught that the best methods of food cultivation are those aligned with nature, which on a practical level means minimal soil disruption (no tilling or weeding) and no application of chemicals (be they fertilizers or pesticides). Back then, the book fortified a budding movement of back-to-the-landers, but today its message is vastly more pertinent: for while the movement to align farming with nature is burgeoning and has spawned various systems—all generally referred to as „organic”—still dominant and spreading globally is the destructive track. It gains strength from the corporate-propagated argument that without massive petrochemicals and soil disruption, we will certainly starve. As a result, pesticide use per acre has quadrupled since my youth and large-scale, fossil-fuel, corporate-monopoly-dependent farming continues to displace traditional practices worldwide.

Mr. Fukuoka believes that natural farming proceeds from the spiritual health of the individual. He considers the healing of the land and the purification of the human spirit to be one process, and he proposes a way of life and a way of farming in which this process can take place. LARRY KORN

Today the dangers of petrochemical agriculture are widely known and about two-thirds of Americans say they’ve tried „organic” food. Even so, the myth remains that organically raised produce is inevitably more expensive than food produced with the benefit of chemicals and must therefore be a luxury, impractical for the masses. Even many who are deeply engaged in sustainability movements revert to the idea of „lack” or of doing without in order to save the environment. Fukuoka, by contrast, encourages us to trust nature’s bounty; in The One-Straw Revolution he describes how his yields rivaled those of neighboring farms that used the dominant technologies of the day. And in recent years his experience has been widely validated: it is estimated that low- or no-till practices are currently being used to farm 250 million acres of land worldwide, and in 2007 a University of Michigan study projected that overall food availability could increase by about half if the whole world moved to ecologically sane farming.

The assumption that confronting scarcity is an immutable fact of human existence, I believe, has led to the paradox we see today: life-stunting overwork and deprivation for the majority alongside life-stunting overwork and surfeit for the minority. So Fukuoka’s message is more deeply radical than simply encouraging farmers to forego tilling or spraying; it cuts to the core of our understanding of ourselves and our place on this earth. He assures us that as we come to experience nature’s patterns we can let go of our fear of scarcity.

„The ultimate goal of farming,” Mr. Fukuoka says, „is not the growing of crops, but the cultivation and perfection of human beings.” And he speaks of agriculture as a way: „To be here, caring for a small field, in full possession of the freedom and plentitude of each day, every day—this must have been the original way of agriculture.” An agriculture that is whole nourishes the whole person, body and soul. We do not live by bread alone. WENDELL BERRY

While Fukuoka does have his list of „do nots,” The One-Straw Revolution is ultimately about having more not less. Nature can do the work we have unnecessarily taken on ourselves, so what Fukuoka terms „natural farming” is less labor intensive. Successful farming is about realizing more leisure in which to experience the richest of relationships, about living in ways that are „gentle and easy.” We can enjoy „sitting back” and even being „lazy,” writes Fukuoka. To make his point he tells of visiting ancient temples in which Japanese farmers of a bygone era left Haiku they’d composed during their three months of winter leisure. Today, he notes, farmers’ three months of leisure have shrunk to days. There is no time to write poetry.
Fukuoka tells us that truly successful agriculture requires not so much arduous labor as awareness, observation, connection, and persistence. Today’s agribusiness companies lure farmers to their products by promising that by applying them to their fields according to fixed, prescribed schedules, without much thought about their unique circumstances, farmers can be sure of reliable profits. This might be termed „know-nothing” farming—very different from Fukuoka’s „do-nothing” farming, which calls on farmers to question conventional practices that may be needless or even harmful: he advocates a curiosity, openness, and willingness to fail, so that we can learn to trust. His is not simple farming but more complex, aligned farming.

Near a small village on the island of Shikoku in southern Japan, Masanobu Fukuoka has been developing a method of natural farming which could help to reverse the degenerative momentum of modern agriculture. Natural farming requires no machines, no chemicals, and very little weeding. Mr. Fukuoka does not plow the soil or use prepared compost. He does not hold water in his rice fields throughout the growing season as farmers have done for centuries in the Orient and around the world. The soil of his fields has been left unplowed for over twenty-five years, yet their yields compare favorably with those of the most productive Japanese farms. His method of farming requires less labor than any other. It creates no pollution and does not require the use of fossil fuels.
When I first heard stories about Mr. Fukuoka, I was skeptical… LARRY KORN

Fukuoka also implies that our fixation on control over nature has led us to assume visual order—the straight, weeded rows of uniform fields—is superior farming. If something appears random, we assume it’s wrong. It doesn’t match our learned aesthetic. But as we come to experience nature as complex patterns of relationships of which we ourselves are part—patterns having nothing to do with the human, visually ordered world—he suggests that we can come to see beneath appearances. Might we, like Fukuoka, find beauty in what we before perceived as distressingly random and untidy?
In a 1982 interview with Mother Earth News, Fukuoka said that „the real path to natural farming requires that a person know what unadulterated nature is, so that he or she can instinctively understand what needs to be done—and what must not be done—to work in harmony with its processes.”
So my wish is that rediscovery of this little, hopeful, almost playful book will help us in the twenty-first century shed our fear of lack, fear that has fueled the drive for control over nature through formulaic answers. My wish is that Fukuoka’s insights live on, perhaps more potent now, as part of an ecology of liberation, not only of the earth but of our fear-clutched psyches as well.
FRANCES MOORE LAPPÉ