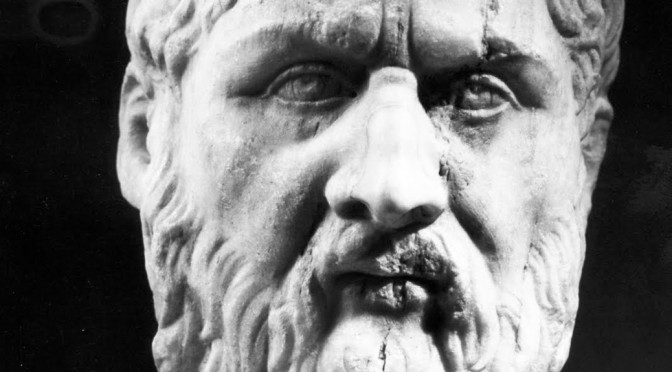 The soul was woven together with the body from the center on out in every direction to the outermost limit of the heavens, and covered it all around on the outside. And, revolving within itself, it initiated a divine beginning of unceasing, intelligent life for all time… …because it shares in reason and harmony, the soul came to be as the most excellent [37] of all the things begotten by him who is himself most excellent of all that is intelligible and eternal.

Is our perpetual claim that there exists an intelligible Form for each thing a vacuous gesture, in the end nothing but mere talk?

But as the stream that brings growth and nourishment diminishes and the soul’s orbits regain their composure, resume their proper courses, and establish themselves more and more with the passage of time, their revolutions are set straight, to conform to the configuration each of the circles takes in its natural course. They then correctly identify what is the same and what is different, and render intelligent the person who possesses them. And to be sure, if such a person also gets proper nurture to supplement his [c] education, he’ll turn out perfectly whole and healthy, and will have escaped the most grievous of illnesses. But if he neglects this, he’ll limp his way through life and return to Hades uninitiated and unintelligent.

We prove unable to draw all these distinctions and others related to them—even in the case of that unsleeping, truly existing reality—because our dreaming state renders us incapable of waking up and stating the truth…

So anyone who is a lover of understanding and knowledge must of necessity pursue as primary causes those that belong to intelligent nature, and as [e] secondary all those belonging to things that are moved by others and that set still others in motion by necessity. We too, surely, must do likewise: we must describe both types of causes, distinguishing those which possess understanding and thus fashion what is beautiful and good, from those which, when deserted by intelligence, produce only haphazard and disorderly effects every time.

As it is, however, our ability to see the periods of day-and-night, of months and of years, of equinoxes and solstices, has led to the invention of number and has given us the idea of time and opened the path to inquiry into the nature of the universe. These pursuits have given us philosophy, a gift from the [b] gods to the mortal race whose value neither has been nor ever will be surpassed.

Let us rather declare that the cause and purpose of this supreme good is this: the god invented sight and gave it to us so that we might observe the orbits of intelligence in the heavens and apply them to the revolutions of [c] our own understanding. For there is a kinship between them, even though our revolutions are disturbed, whereas the universal orbits are undisturbed. So once we have come to know them and to share in the ability to make correct calculations according to nature, we should stabilize the straying revolutions within ourselves by imitating the completely unstraying revolutions of the god.

…our “likely story.” But if anyone who in considering these matters were to put them to an actual test, he would demonstrate his ignorance of the difference between the human and the divine. It is god who possesses both the knowledge and power required to mix a plurality into a unity and, conversely, to dissolve a unity into a plurality, while no human being could possess either of these, whether at the present time or at any time in the future.

…that the truth has been told is something we could affirm only if we had divine confirmation. But that our account is surely at least a “likely” one is a claim we must risk, both now and as we proceed to examine the matter more closely. Let that be our claim, then.